For most people, living aboard a continuously circumnavigating vessel is an exciting, novel concept that very few get to experience. For Storylines Founders Circle members Bob and Carol, the live-aboard lifestyle is all these ex-pats have known for the better part of the last 10 years. Born in Washington DC, Bob joined the US Navy right out of high school at the age of 17 for what would become a long career in military service that would take him to ports of call near and far. Eventually, he would be stationed in Washington State where, coincidentally, Carol was born and raised. Once there, Bob became enamored of the state’s abundance of natural beauty and eclectic geography so he decided to make the move permanent, taking up residency there.

At the time, Carol was moving frequently around the United States, but she eventually settled in the Silver State of Nevada. As fate would have it, Bob was in town attending a conference when he found a kindred spirit in Carol; they fell in love and haven’t looked back since. 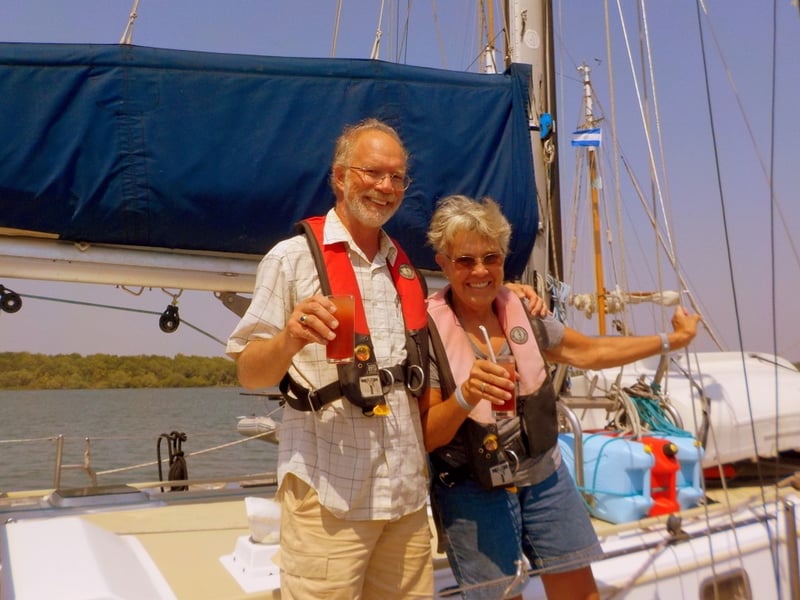 Bob & Carol living it up in Bahia del Sol

With wanderlust in their hearts and a budding romance, they decided that sailing around the world as live-aboard sailors on a 45ft boat was a dream they both wanted to explore. Their journey commenced in Washington State, headed north to Alaska then down the west coast to Panama where they are currently pausing before continuing on to presently unknown destinations until it's time to move aboard MV Narrative. Every year, they set aside one to three months to travel to the places they most want to visit. Their love of the Spanish language sent them to Ecuador where they enrolled in classes. They’ve also done an extensive tour of the whiskey trail in Scotland with subsequent visits to Wales and Finland as well. Next year they plan on taking a world cruise to visit the frozen beauty of Antarctica and the Nordic coastlines of Scandinavia. The last leg makes stops in Mexico, eventually winding up back in the United States at the journey’s end.

So, what is it about the Storylines lifestyle that these ex-pats look forward to the most?

“Living on a boat requires a great deal of maintenance, says Bob, because things are always breaking down. Storylines takes those complications right out of the equation. We can just live.” Carol adds, “Sailing requires a good deal of physicality and vigilance. One of us always has to be on watch to ensure that we get to where we’re going safely. It will be so nice to be able to exhale, relax and let someone else worry about that for a change.”

They can’t wait to enjoy their new spacious residence too, where Bob will actually have room for his electronic keyboard so he can start tinkling the ivories again. The couple would also like to help organize movie nights onboard, exploring different themes and genres as a way to bring the community together through a shared love of film.

Thanks to Bob and Carol for taking the time to let us get to know them a little better and welcome aboard!