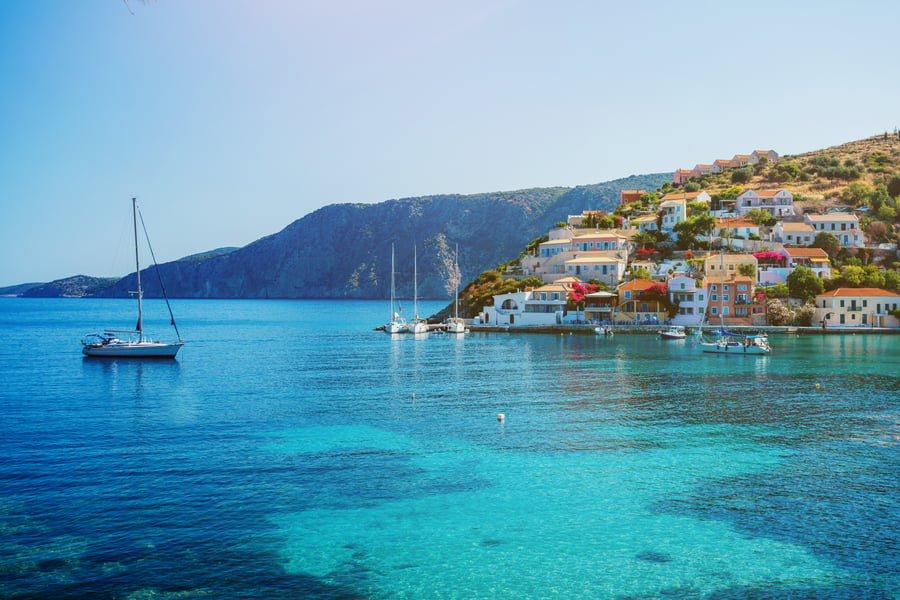 Welcome to the Ultimate World Cruise Itinerary blog series, based on the survey results of the resident owners of Storylines first residential ship, MV Narrative. We asked our residents to nominate their top wish-list travel destinations. This resulted in over 130 requests!

You read that right - our community has a say in the itinerary. This is one of the many benefits of being a resident on MV Narrative  -  you curate the experience. With such an extensive list of destinations to cover as part of this 'wish list itinerary', we are breaking it down by creating a series of blogs by region:

In each region, we are discussing the desired countries, ports, and main attractions. We highlight activities, must-see sites and travel tips so you can make the most of the port stops. Additionally, for any fans of world cruises who are interested in learning more about living on a Storylines ship, this will give you a glimpse of what’s in store, as we are hopeful that many of these featured locations will become a part of our actual itinerary.

We are starting the first blog post in the series in Croatia and covering the Eastern Mediterranean Sea. Here, we will explore the requested locations, offer recommendations for arrival, and provide interesting facts about the Mediterranean islands and the general region.

About the Requested Eastern Mediterranean Destinations

As you can imagine, there were many wish list destinations for Europe and the Mediterranean Sea. As such, we have broken it down into Western Europe and Eastern Mediterranean. The Western Europe post will cover such iconic areas as the French Riviera, Balearic Islands (Palma de Mallorca) and the Italian island of Sardinia, among others. However, this post is for the Eastern Med, which includes the following requested locations: 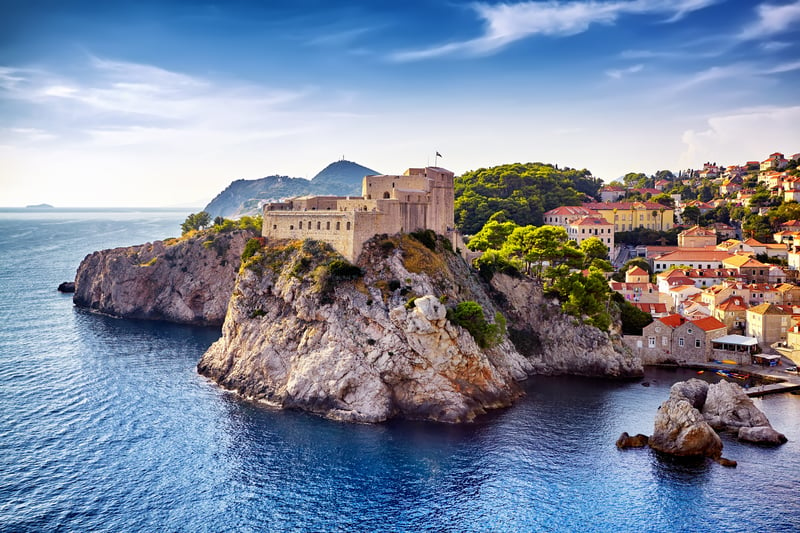 Located on the beautiful Adriatic Sea is our first destination, Croatia. With no specific port cities requested, we have taken it upon ourselves to select Split and Dubrovnik. These also happen to be the two most popular port stops, and for good reason. 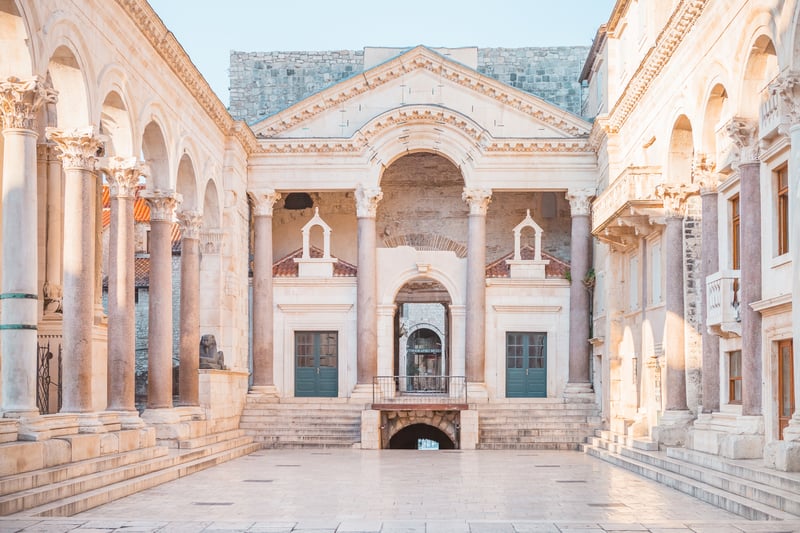 Split old town lies beneath the ancient walls of Diocletian's Palace and is a must-see. Just stroll around and get lost in this UNESCO listed historical complex. Take some time to explore the area as a global citizen! 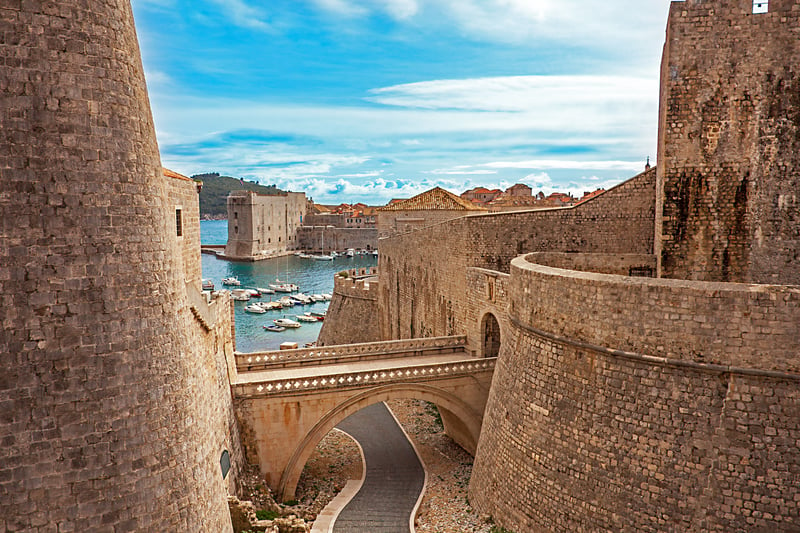 You have probably heard of Dubrovnik, aka The Pearl of the Adriatic. It's a hugely popular Mediterranean destination and its fame only increased after being used as a location shoot for many scenes in Game of Thrones. It is easy to see the appeal with its beautiful ancient architecture combined with enchanting coves, lovely beaches and the sparkling turquoise water of the Adriatic Sea. Not to mention the local culture, cafés and thriving nightlife.

Dubrovnik's cruise port has recently been upgraded, which means ships of our size can now dock. Old Dubrovnik is about 2.5km from Gruz Harbor port and they provide shuttle buses into the city center. Like Split, it’s best to explore this old town on foot, get lost, and discover. Dubrovnik is also known for its great nightlife, so if you feel like trying some of the Croatian wine hitting the dance floor, there are plenty of choices.

Insider tip: If you have time, get yourself down to a little town just south of Dubrovnik called Cavtat. Much less touristy and a little known treasure trove.

As the coastline extends south of Croatia on the Adriatic Sea, we will reach the next country's destination, Montenegro, which is part of the Balkans. It is lesser known to its neighbor due to it being a young country having only become independent from Serbia in 2006. However, the small country has a lot to offer with beautiful beaches, magnificent mountains and a rich history and culture. We will focus on the Port of Kotor and surrounds. 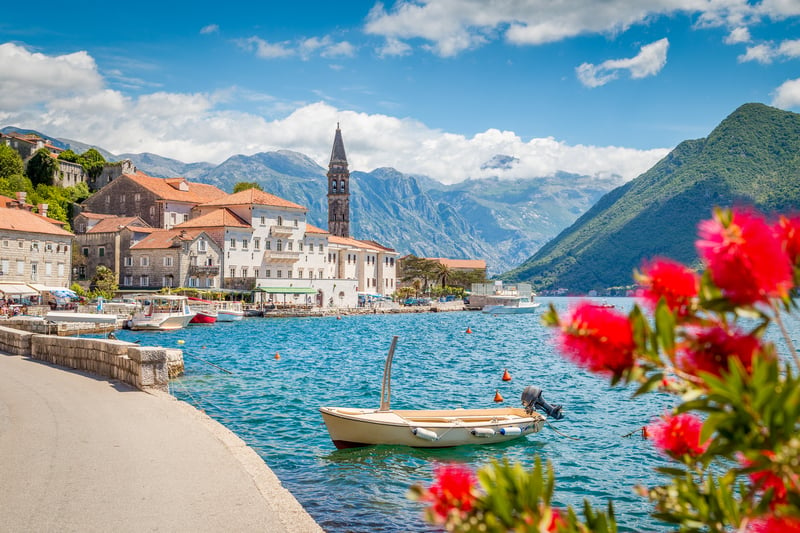 Cruising into the Gulf of Kotor, a submerged river canyon off the Adriatic Sea, is one of the highlights of this leg of the journey. Let’s make sure we request the captain to blow the ship's horn as the echo can be heard for up to fifteen seconds! Kotor Pier is roughly 300 feet from the UNESCO old town and the Venetian Fortress.

The city of Kotor is known as one of the best-preserved medieval towns in the Mediterranean region. With no cars; the narrow streets, squares and medieval structures dating back to ancient times earned Kotor a place on the UNESCO World Heritage List. Everything is within walking distance in this charming old town which is completely surrounded by high mountains. If you love a good hike, climb up to The Fort, which offers the most spectacular views of the bay and old town below. We also recommend some farther excursions if we stay a while at port to see the best of what this spectacular little country has to offer. 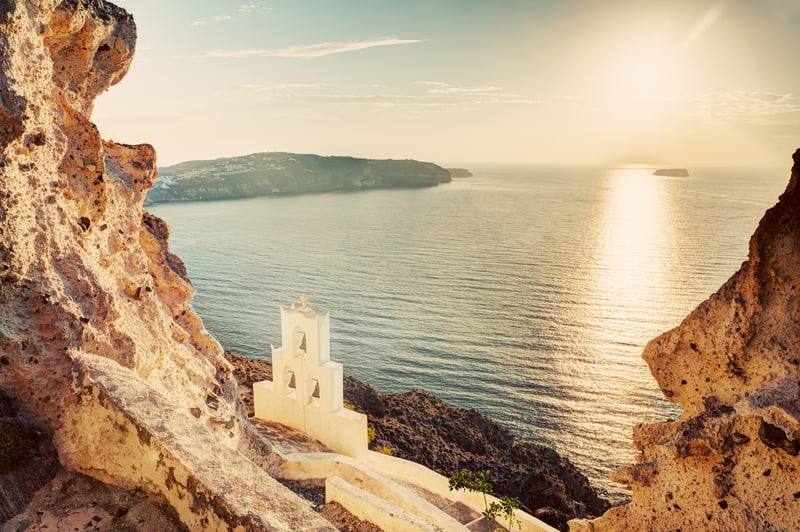 Unsurprisingly, the beautiful Greek Islands made the cut. Specifically, the islands of Santorini, Mykonos and Milos. (While Athens was not named, some may want to also venture to the mainland to see the Acropolis.) Not only do the islands have a fascinating history, with ancient sites and Roman ruins, they also boast some of the best beaches, such as the famous Mastichari Beach and Navagio Beach, and the prettiest villages, such as Kos Town and Oia, on the planet. For this reason, the Greek Islands attract visitors from around the world seeking a classic Mediterranean vacation. Hopefully we avoid the tourist season! For the sake of this blog post not turning into a novel, we will just focus on these three Greek islands in the Aegean Sea. 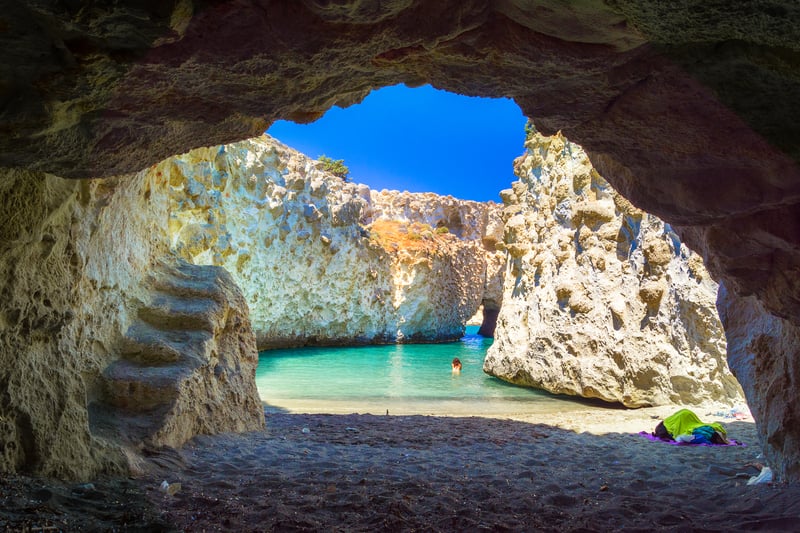 Milos is known as the Island of Color due to its colorful sands, rocks and waters. This stems from its volcanic origins. The port is located in the harbor town of Adamas. This is an island for beach lovers and water babies. If this sounds like you, then we recommend taking one of the many boat tours around the island to secluded beaches only accessible by sea. Here you will find some of the most crystal clear waters ideal for snorkeling. 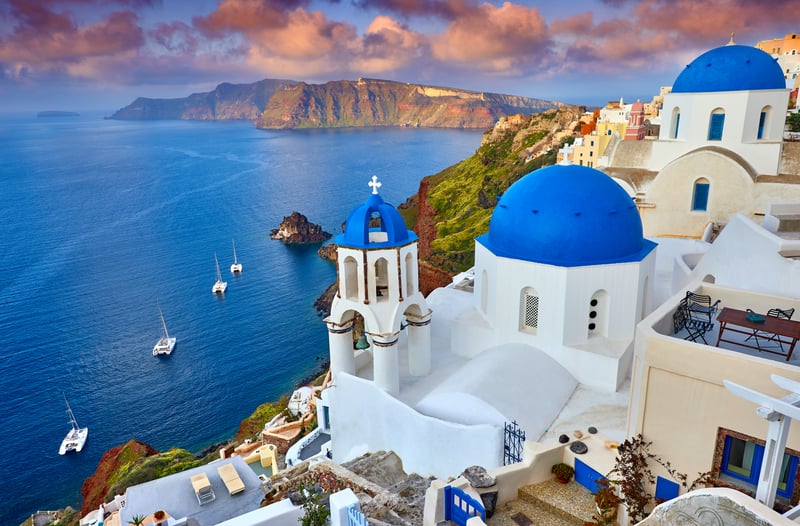 As MV Narrative cruises into Santorini, it's important to remember we are approaching the huge crater of a still active volcano. However, the volcano is what makes for such a unique and beautiful landscape. For the quintessential Santorini experience you will want to explore the narrow winding streets and famous cliff top whitewashed houses of Thira and Oia overlooking the azure blue waters of the Caldera. Wear proper walking shoes and take plenty of water as it's steep terrain.

Santorini tip: for the complete Santorini experience we recommend booking one of these iconic homes on Airbnb for a night or two well before arrival. 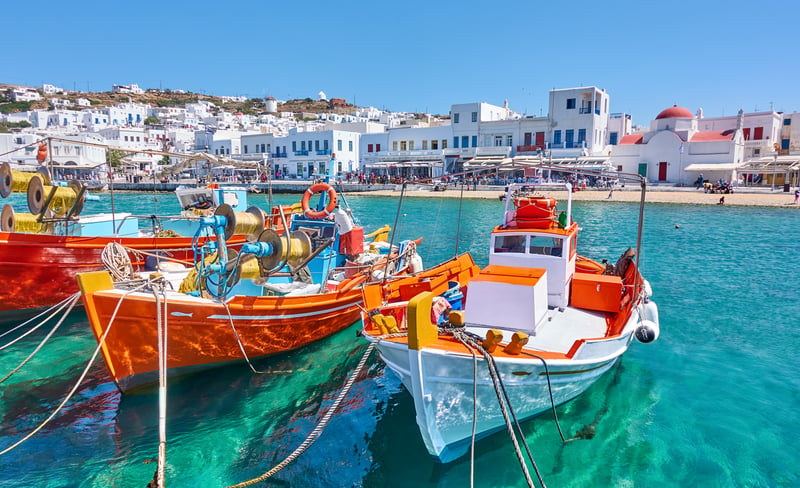 The Greek island of Mykonos is famous throughout the world for both its relaxing beach vibe and thriving nightlife. It is the most cosmopolitan of the Greek islands, attracting different people and cultures from all walks of life which creates a vibrant and exuberant atmosphere with a touch of decadence. This is the island where you might spot a celebrity on their superyacht anchored off the beach or in one of the major resorts.

The new port of Tourlos is about a 30 minute walk into town. Alternatively, there are shuttle bus and sea bus services available. We recommend taking the sea bus. Mykonos is a place to indulge in high-end boutique shopping, gourmet restaurants and trendy beach bars. Or, you can just relax, enjoy a drink and soak up the sun like a Greek God from one of the famous colorful balconies overlooking the Aegean Sea. 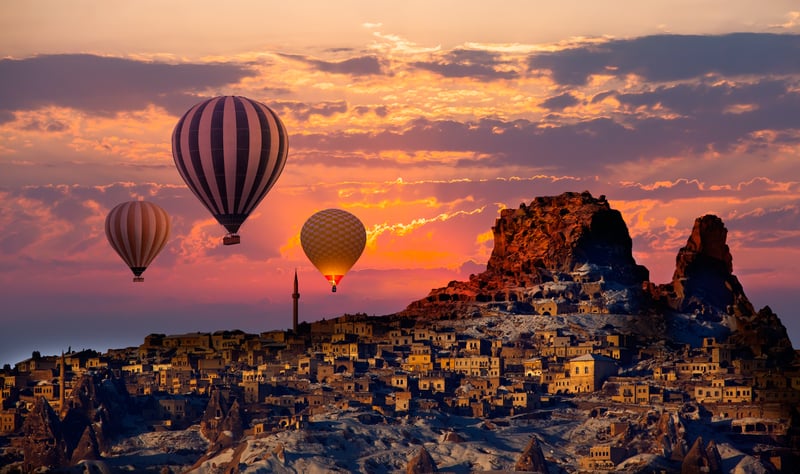 As we leave the beautiful Greek Isles and cross the Aegean Sea into smaller seas, we hit our next country's destination: Turkey. Both Turkey and Istanbul specifically were requested. As such, we will explore Istanbul and one smaller port. After doing some research, we have chosen the port city of Antalya...and we think you will like it. But first, the incredible city of... 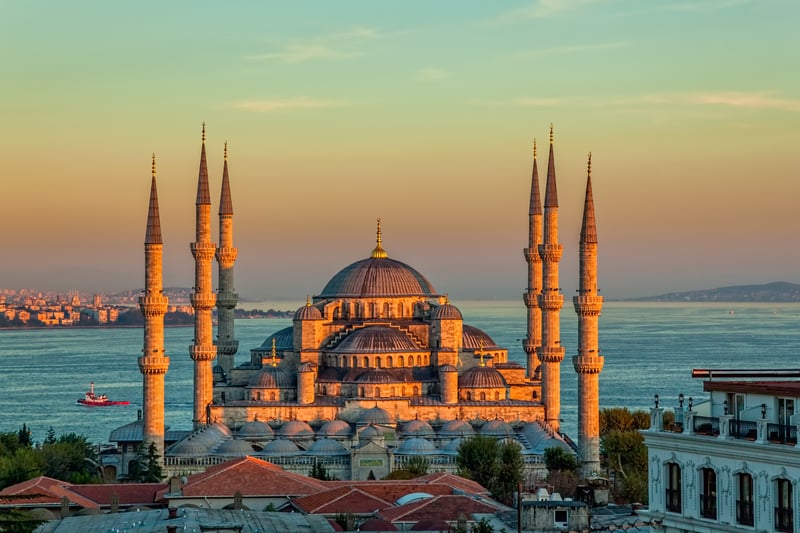 Make sure you are up on deck as MV Narrative cruises through the narrow strait into Istanbul. As we approach the city you will get a prime view of all the domes, minarets and other incredible architecture that makes it one of the most awesome skylines in the entire world. What's more, Istanbul's new five-berth cruise port is complete, meaning ships can dock close to all the action.

You will want to take a tram to Sultan Ahmet, where most of the city's highlights are located. The tram stop is only a few blocks from the port and runs every five minutes. From Sultan Ahmet Square, most of the main highlights are within walking distance. Therefore, explore this incredible east meets west city on foot. Alternatively, there are hop on hop off bus tours taking you around to all of Istanbul's must-see attractions. 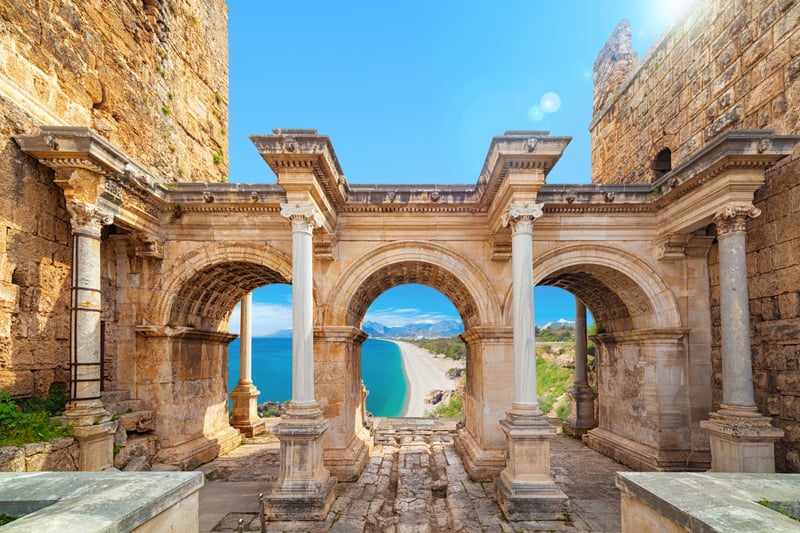 Port Akdeniz is the most likely dock for a ship of our size with taxis into Antalya, a modern city and popular summer vacation destination on Turkey's Mediterranean Coastline facing out to the Island of Cyprus. The contrast of the stunning bay, amazing beaches and turquoise water with the dramatic snow-capped Taurus Mountains in the background make Antalya a truly unique place like no other. While Antalya has rainy winters, its summers are hot and sunny.

Turkey is such a unique and beautiful place but like everywhere, it has its challenges. One such issue you will notice when visiting is stray dogs and cats. These animals are born on the streets, instead of at someone's home. However, through workaway.info, one family has made a refuge in Antalya sheltering abandoned and stray dogs and cats. You can contribute by walking the dogs, training them, and playing with them.

We hope you have enjoyed this epic post exploring our resident curated destinations in the Eastern Mediterranean. Be sure to tune in for our next post cruising the Middle East and Africa, including Cyprus and the Red Sea. If you are interested in learning more residential world cruise ships including Storylines resident community of global citizens, you can do so here.

Disclaimer: The ultimate world cruise itinerary blog post series explores some of the requested destinations of our community of global citizens on board Storylines MV Narrative. It is for inspiration only at this time and the final itinerary has not yet been set. Further information in our FAQ.

*Note, this blog post series in no way represents MV Narrative's actual itinerary. It is based entirely on requested destinations (which we hope to include in the official itinerary whenever possible)