A Brief History of Storylines

How it all Began

Storylines was developed to enable a wide diversity of people to travel the globe in total freedom and comfort. In 2016, founders and lifelong travellers Alister Punton and Shannon Lee were in the land-based real estate and construction sector and were ready to take that experience and shift it toward a new venture by creating a residential community at sea. There was only one successful product in the market at the time and it catered to ultra-high-net-worth individuals. Two years of market research and hundreds of pages of spreadsheets indicated there was enough demand to expand to a broader audience by making the lifestyle more affordable.

They established a corporation registered in the UK before moving it to Delaware, USA with its main address in New York. The company was in a unique multinational position to reach a worldwide market with founders based in Australia and England and employees working remotely in several US states. A brick and mortar location wasn’t required as the corporate headquarters are to be based on board the ship.

Getting the venture off to a successful start involved having an advisory team of top industry professionals. Some of these premier experts in the field included Tillberg Design of Sweden for ship design, Dr Paul Read of Gelen Marine for vessel construction and project management, Grant Holmes - Global VP of Cruise Solutions at Inchcape Shipping Service, and Lloyd’s Register Classification Society for safety, legislative and regulatory oversight.

The original concept was to redevelop existing ships into the Storylines lifestyle and brand. A list of priorities, guidelines and principles was established with the advisory team. The foundational goals were to create a safe and secure long-term vessel which was reliable, clean and well maintained that would be widely accessible. The company’s competitive advantage would be in providing a sustainable, healthy and relaxing environment for a lifestyle of world exploration. The differentiating features of the Storylines experience would be the residential nature of the ship, providing an affordable and culturally immersive home for an adventurous community.

It wasn’t long before that adventurous community started to form. They are people from all walks of life who believe in the founding principles of discovery, a live-aboard lifestyle, interactive experiences, participation in the community, contribution instead of exploitation, having a conscientious mindset, and being joint owners of the vessel. These future residents, now known as the Founders Circle, shared their ideas for what they thought should be incorporated in the ship, the lifestyle, and the itinerary. The management team continuously consulted with the community throughout the foundational years and reshaped their vision based on feedback to create the company that Storylines is today.

Getting to the current point involved a winding road, as most startups can attest to. The company was eager to secure a ship early on, so in 2018 they consulted with Dick Rosman, a maritime industry veteran of almost 40 years to assess more than a dozen ships around Europe. There were a few good ones worth considering such as ‘MV Henna’ - her sister ships are ‘Grand Celebration’ and ‘Magellan’. After negotiations failed with the owners, she was later sold for scrap at a much lower price and eventually beached in India. 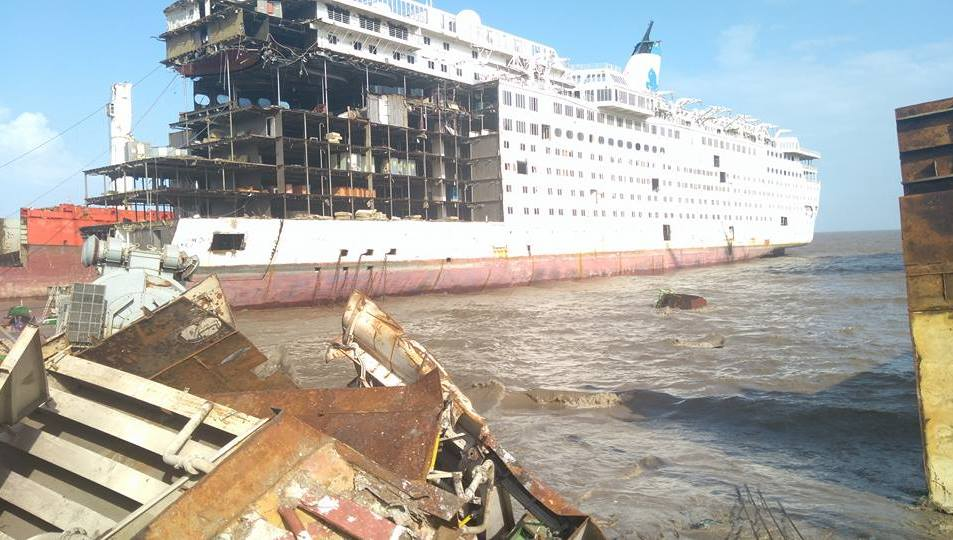 Terms were then agreed on another ship, the Marco Polo with Cruise Maritime Voyages (CMV) based out of Greece. Redesign work was completed for what would have turned out to be a major refit. Shortly after starting to promote the vessel, it became apparent that the age and size of the ship were not going to be completely suitable for what Storylines’ future residents needed in terms of value and quality of lifestyle.

A more suitable ship was then identified in Florida with Bahamas Paradise Cruise Line - the Grand Classica (formerly the Costa Classica) and the redesign process started anew. With the newer and larger ship, the company was able to offer accommodations more suitable for living aboard. After consulting with ports to schedule the itinerary, it became apparent that new environmental laws, which were due to take effect the following year, meant that the business model with this ship was at significant risk. Stricter environmental standards put forth by the International Maritime Organization outlining lowered emissions standards meant that ports in certain Emission Control Areas could soon be rejecting older ships.

The second ship, the Grand Classica, with three new forward half decks and other style modifications

The new emissions regulations made it apparent that building a new ship would ensure the longevity of the Storylines lifestyle for its residents for many years to come. With industry design partners Tillberg Design of Sweden, Storylines set out on designing a new vessel.

This resulted in changing the launch date from 2020 to 2023 and increasing the costs of the units. Residents who had already reserved a unit were happy enough to upgrade to a more modern vessel and recognized that an increase in value and a more luxurious lifestyle would be worth waiting for. The downside was that these shifts caused confusion with prospective buyers about pricing as internet searches turned up outdated pricing points and deck plans from previous ships.

The new-build ship, to be named MV Narrative, has significant upgrades:

The staff of Storylines are readily available by chat and phone to discuss the history of the company or to discuss the future residential life onboard the new ship. They look forward to getting to know you as they will also be a part of the community when MV Narrative sets sail.