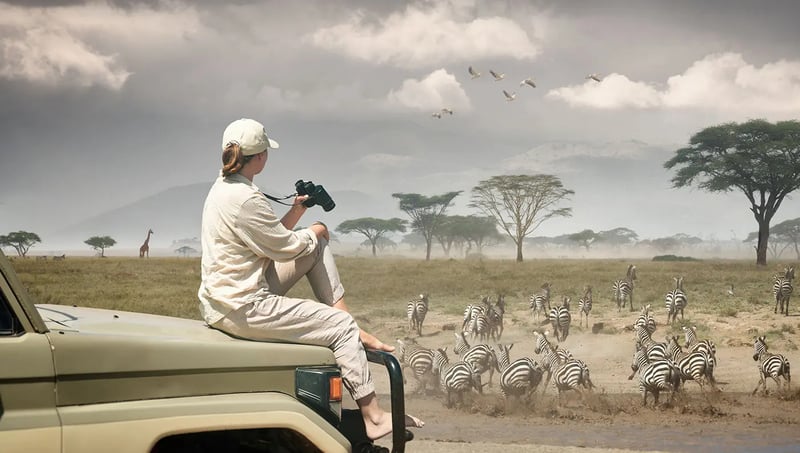 There are so many reasons people are interested in global travel. Some of us love exploring the wine regions of the world, while others are keen to learn about the rich history and culture of ancient civilizations. Some travel to see the world’s greatest artworks. Others are more interested in wildlife tourism. We at Storylines are living a travel lifestyle, so we can do all of the above as part of our everyday lives. Today we bring you the best places on land to see wildlife on this amazing planet we call Earth. 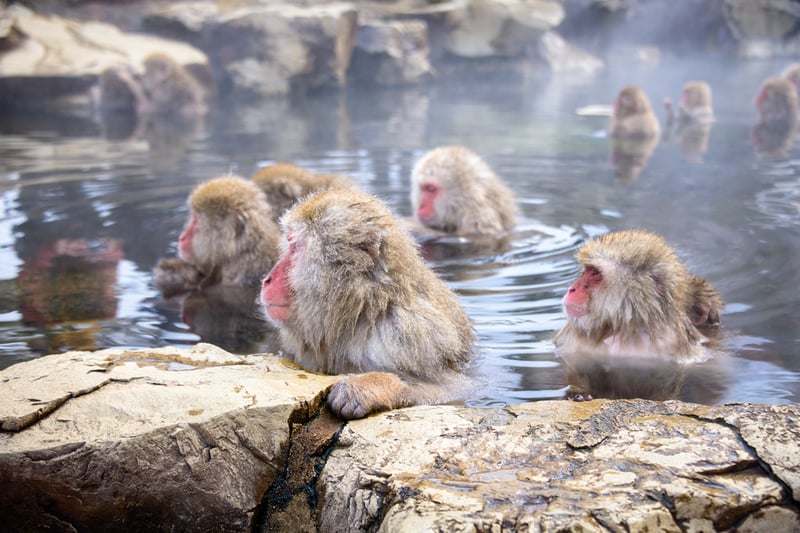 According to research carried out by the World Travel & Tourism Council (WTTC), wildlife tourism accounts for a whopping $343.6 billion towards the global GDP (pre-pandemic). To put it into perspective, that is equivalent to the entire GDP of Hong Kong or South Africa. Moreover, 6.8% of total jobs sustained by global tourism are attributed to wildlife tourism.

In short, wildlife vacations are of vital importance - you are not only enjoying exotic experiences but also contributing to local communities, and when done responsibly with conscientious tour operators, you are contributing to conserving these wild places. This particular writer likes to travel the world to different wildlife places, having done four African safaris and counting.

The world’s best destinations for wildlife 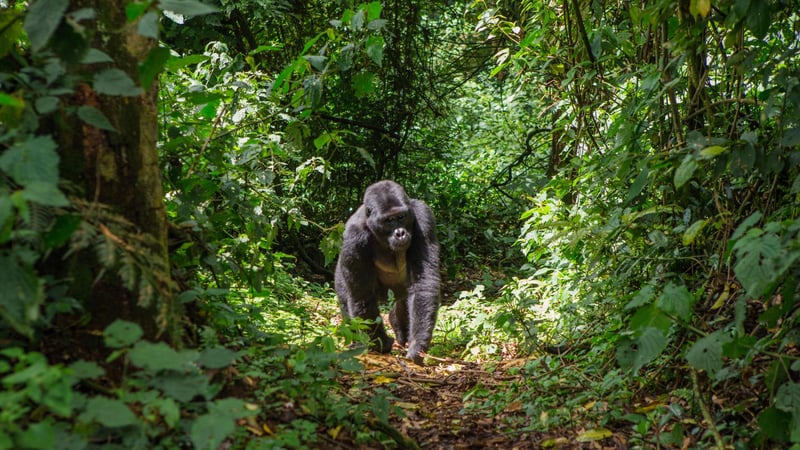 A hugely popular wildlife vacation includes a visit to our closest cousins - gorillas. These are truly incredible creatures and they are so human-like it’s uncanny. While it’s fascinating to watch these animals at the zoo, nothing beats seeing these rare and intelligent primates than in their natural habitat. The best (and safest) countries to see them are Rwanda and Uganda.

For Rwanda, you need to head to the country's northwest to the world famous Volcanoes National Park. This spectacular rainforest is home to the magnificent mountain gorilla. You can embark on a walking tour that follows the footsteps of Dian Fossey, the American primate conservationist who famously wrote the book, Gorillas in the Mist, which was adapted into a movie starring Sigourney Weaver. As a result, it brought worldwide attention to the importance of gorilla conservation. To date, there are only 178 gorillas left in this particular habitat.

For Uganda, you will want to head to the Bwindi Impenetrable Forest National Park. As the name suggests, it's a thick rainforest. It’s also home to roughly 400 gorillas, half of the world’s remaining population. A guided trek will take you to the 11 family groups that call the jungle home. Or for a more exclusive experience, we recommend adding the Gorilla Habituation Program to your itinerary. This is a more intimate encounter where you get to meet gorillas not yet fully habituated, thus playing a role introducing them to human interaction.  A highlight is seeing the adorable baby gorillas. 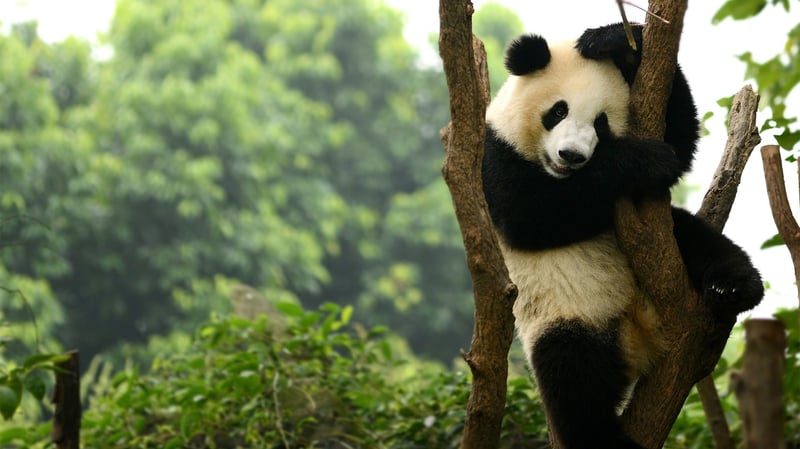 Are baby pandas just not the cutest of them all? They would have to be up there on the cuteness scale. Native to China, they are considered a national treasure.  In the wild, they are found in the mountainous and remote regions of central China, in the Gansu, Sichuan, and Shaanxi provinces. These areas are high altitude, cool and wet with dense bamboo forests, which makes sense as bamboo is pretty much their whole diet.

There are few tours available in which you get to see giant pandas in the wild due to them being such a protected species. Natural Habitat Adventures does offer a 12 day hiking tour to get up close and personal with these charismatic creatures for $12,495 USD.

There are also giant panda sanctuaries that you can visit or even volunteer at. Here, they have special breeding programs because pandas are solitary creatures that generally do not like to be around other pandas, exacerbated by the fact that they have an extremely low sex drive. As a result, the Chinese make videos of pandas mating for the pandas to watch in an effort to encourage them to reproduce. True story.

Kangaroos and Koalas in Australia 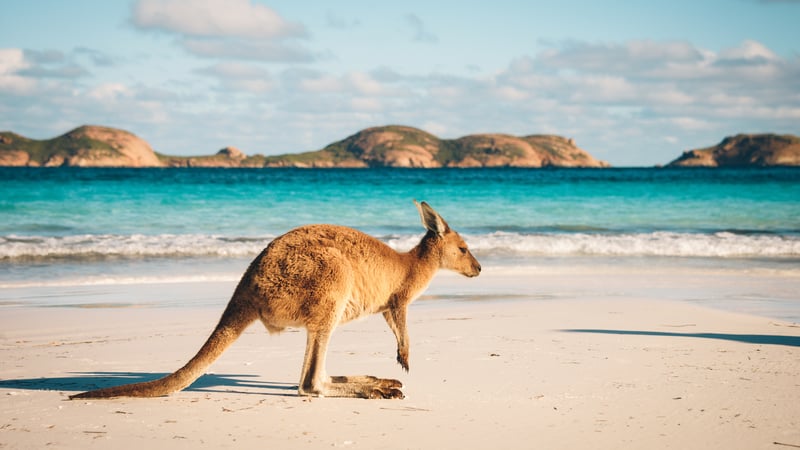 Despite what you may have heard, there are no kangaroos bouncing along the Sydney Harbour Bridge. Although it is possible to spot a wild kangaroo in pockets of Sydney and other major Australian cities, it is rare. You are best to head up or down the coast or out to the bush. There is no shortage of kangaroos in Australia so you’ll be sure to spot them if you venture outside the cities. Keep your distance, however...the big red kangaroos are tough and have been known to get into fights with humans. They don’t call it the boxing kangaroo for nothing!

Koalas, on the other hand, are harder to come by. They are now considered an endangered species, especially after the devastating bushfires of 2019 where a significant portion of the population was wiped out. Thankfully, there have been many koala conservation initiatives and wildlife places restored since.

One of the best wildlife vacations where you can spot koalas in the wild is Magnetic Island, off the coast of Townsville in the tropical far north Queensland State. The island is quite unique in itself and has many great hiking trails. If you hike the Forts Walk, you are bound to see a few koalas along the way. Additionally, you get some history with the WW2 forts built during the Pacific War to defend against the Japanese, as well as an amazing view of the island!

There is also a koala sanctuary on the island where you can stay and cuddle a koala. However, as cuddly as koalas look, they actually have sharp claws for climbing trees. All they really do is eat and sleep. The eucalyptus leaves they eat contain so few calories that they sleep up to 22 hours each day. Sometimes they even fall out of the tree asleep, giving rise to the Aussie urban legend of the dangerous Drop Bear.

Polar Bears and Walruses in The Arctic 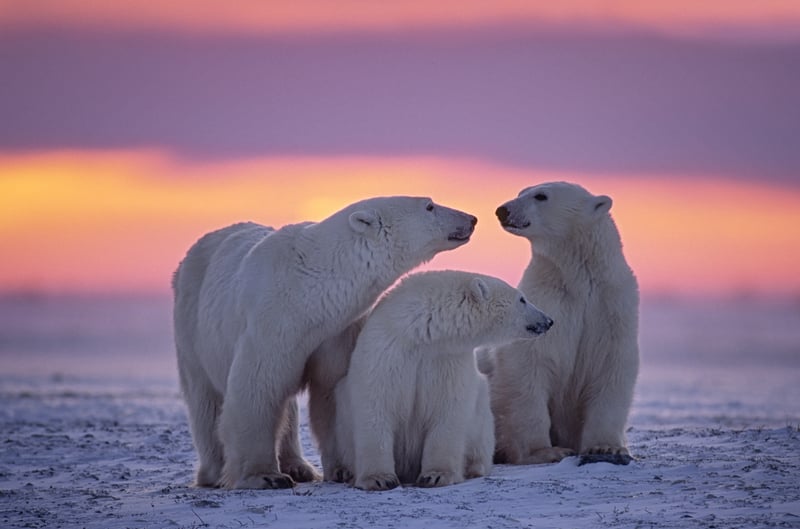 The unique landscape and rare wildlife of the arctic must be explored either by cruise ship or private charter flights. To get the full arctic experience we recommend doing a tour of Svalbard, Greenland and Iceland. Most cruises will usually depart from Oslo, Norway or Reykjavik, Iceland. Alternatively, many cruises have the arctic on their itinerary.

Polar bears are big majestic creatures, which can reach 11 feet tall. They are the largest carnivore that lives on land and their diet consists mainly of seals. Fun fact is that polar bears actually have black skin and their fur has no pigment.

You might be lucky to see walruses also. They are absolutely massive, with males weighing in at a max 1,700 kg so it shouldn’t be hard to spot them. Their large tusks make them easily distinctive.

As an added bonus, if you time your travel from March through May you will have a good chance of also witnessing the phenomenal northern lights.

The Africa Big 5 in Kenya 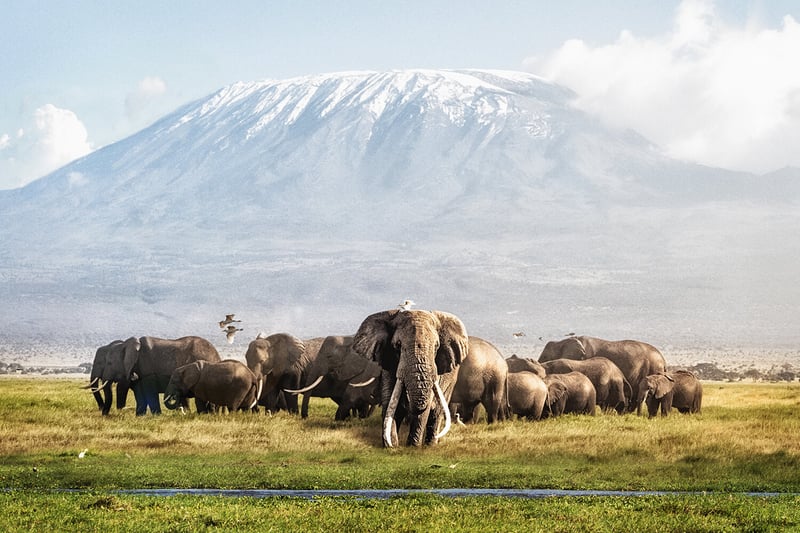 African safaris are the ultimate wildlife adventures. But firstly, what are the big five that everyone wants to see? In no particular order, they are:

Most people think they are called the ‘big five’ because they are the most exciting animals to see on safari. While it truly is amazing to spot all five, the term actually originated from big game hunting. Yes, sadly these amazing animals were (and in some cases still are) considered the top prize hunted animals.

One of the many great places to see the big five is Kenya. While the Maasai Mara National Reserve is considered the biggest and best nature reserve, we also recommend the smaller Tsavo National Park closer to the coast and Mombasa.

Here, you can stay at the Man Eaters Lodge, where you can learn about how the king of the jungle, the lion, fought back against being hunted as a member of the big five. Man Eaters Lodge is located near the Tsavo River railway bridge which, when constructed in 1898 by the British, was terrorized by two giant rogue killer lions. Approximately 140 of the railway workers were killed. Yes, you read that correctly. The story is so incredible that it was adapted into a movie, The Ghost and the Darkness, starring Michael Douglas and Val Kilmer. Besides the fascinating history, you can spot wildlife right from the riverside lodge camp, including elephants, hippos and crocodiles.

For a more luxurious experience, we suggest you look at the Sheldrick Wildlife Trust, which has a range of premium eco-lodges located throughout Kenya. They are great supporters of Kenya’s wildlife through sustainable tourism.

Jaguars, anacondas and toucans in the Amazon 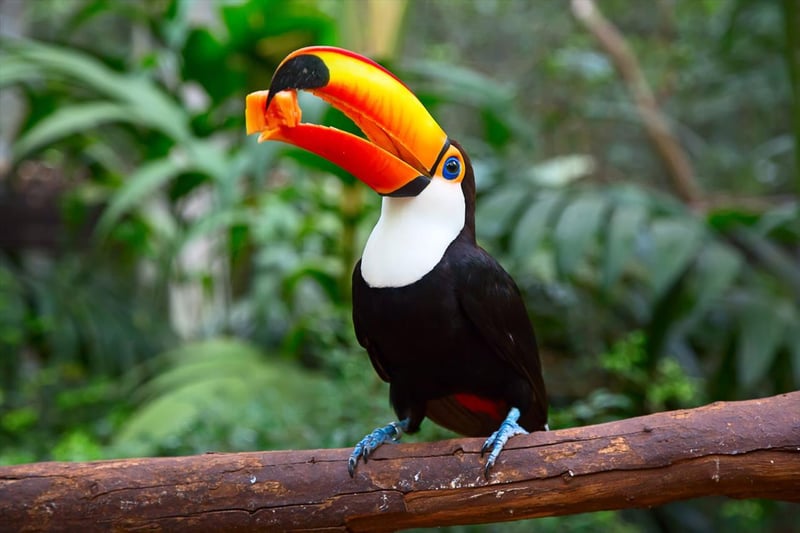 The Amazon Rainforest is the largest rainforest in the world, encompassing eight countries and 40% of the South American continent. However, almost two thirds of the rainforest is located in Brazil. The Amazon rainforest is one of the most biodiverse places on the planet, with over 2500 tree species, 2.5 million insect species, and an abundance of exotic wildlife, making it one of the best wildlife vacations in the world.

The best place to venture into the Amazon is from Manaus, a modern city in the middle of the jungle. In Manaus, there are plenty of jungle lodges scattered throughout the region. We recommend the first-rate, Amazon Jungle Palace. They can organize transfers from Manaus airport. From there, you can take other boat tours delving deeper into the rainforest to see such exotic wildlife as jaguars, giant anacondas and perhaps the most peculiar yet beautiful looking bird on the planet; the toucan. 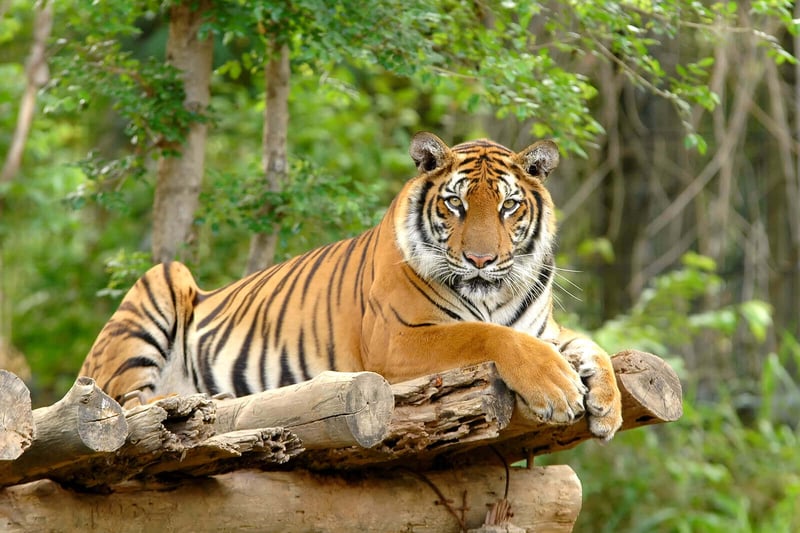 Where to find the elusive Bengal tiger, one of the biggest cats on the planet? We recommend heading to the tiger reserves of Rajasthan. Here you will find plenty of luxurious lodges where you can organize safari tours into Ranthambore National Park, one of the best places to see the remaining Bengal tigers in their natural habitat. There are currently ninety bengal tigers left in this habitat so the chances of spotting them are high.

Yes, sadly, like many of the animals featured on this list, the Bengal tiger is also an endangered species. They were (and sometimes still are) considered prized game hunting trophies, as well as sought after for Chinese traditional herbal medicine. Thankfully, there are many Bengal tiger sanctuaries in a bid to conserve these wonderful creatures.

Storylines is a luxury residential ship that travels the world for the ultimate global lifestyle. We stay up to five days at port allowing our community of liveaboard adventurers to embark on overland tours, including to some of the best destinations for wildlife mentioned here. To find out more about our remaining luxury floating homes, be sure to visit our website and reach out with any questions.