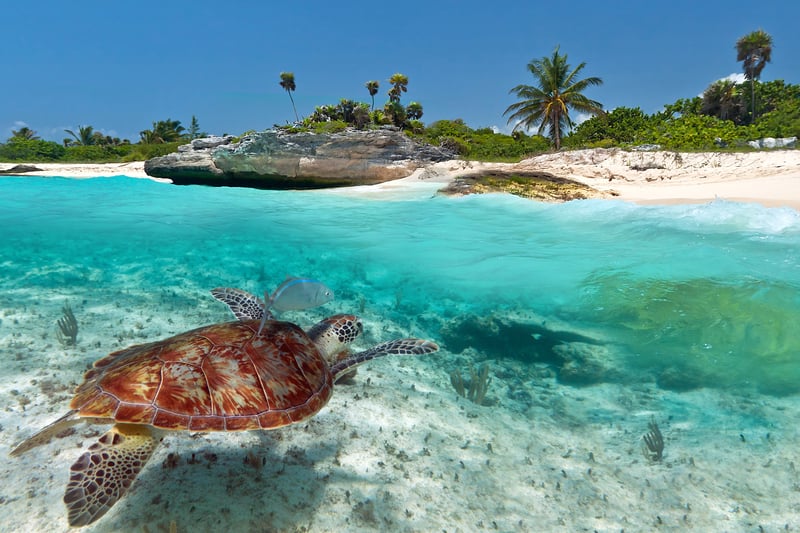 Welcome again to another edition of the Ultimate World Cruise Itinerary blog series. For new readers, the itinerary is charted by our community on board MV Narrative, the world’s most eco-friendly luxury residential ship. We are featuring destinations requested by some of our future residents who will be living on board the vessel, which circumnavigates the globe every three years.

So far, we have covered:

For this post, we will be exploring the Caribbean Sea and Atlantic Ocean Islands, including the requested destinations:

We will also randomly pick some off-the-beaten-path islands and bays to anchor in and explore by zodiac. There will also be options to represent the above request for scuba and the Caribbean Sea.

The Caribbean is one of the world’s most popular cruise and sailing destinations. That is hardly surprising due to the abundant natural beauty, warm equatorial climate, smooth sailing and diverse cultures. 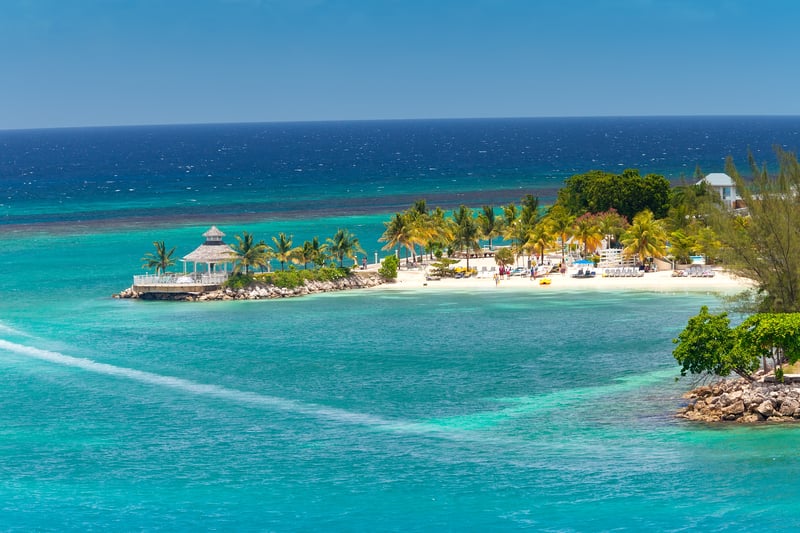 Jamaica is the third largest island in the western Caribbean. It has a difficult history, with Spanish colonists all but exterminating the native Taino people, followed by England bringing enslaved Africans to work the sugar plantations. There is a lot more to Jamaica than beautiful beaches and there is a lot to learn when you get there. As a community of global citizens, our residents understand that it’s important to be culturally sensitive everywhere we travel.

The national language is English, but Jamaican Creole is also widely spoken. It’s a lot of fun communicating with the locals with this combination of dialects. You’ll find yourself asking them to ‘slow down’ a lot so you can understand everything. Kingston (Bob Marley’s hometown) is the capital, but we’re looking at Montego Bay as the place to dock.

Montego Bay Pier can accommodate up to four cruise ships. There’s a tourist information booth at the terminal. 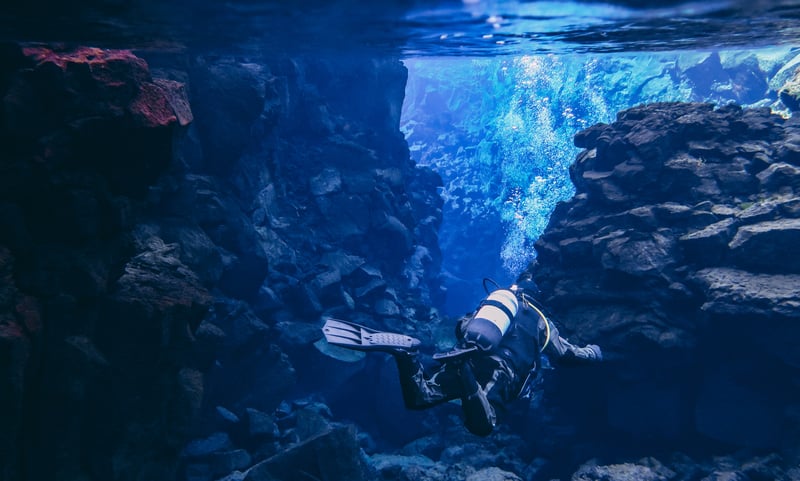 There are countless incredible scuba diving spots in the Caribbean Sea, but here are three renowned locales. 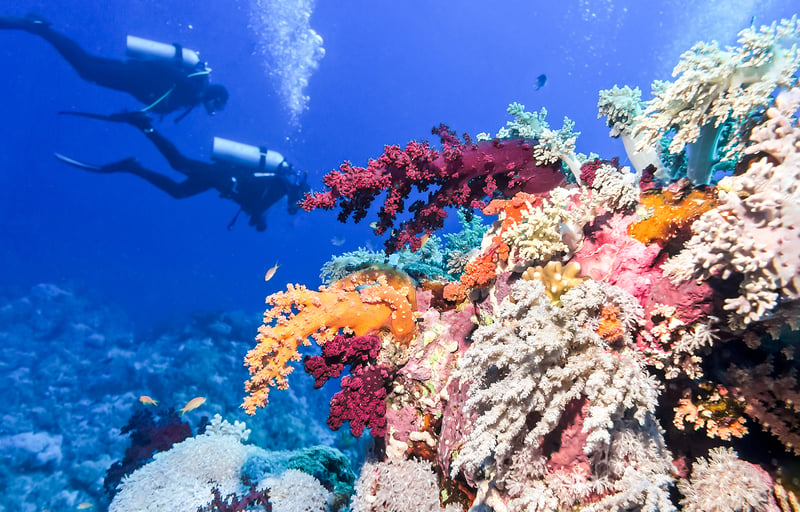 The second largest reef in the world, Belize Barrier Reef, is home to the famous Blue Hole, a seemingly bottomless pit with no ocean floor. There are also well-known dive sites such as Turneffe Atoll, Ambergris Caye, and the nine islands. We should be able to anchor outside the reef and zodiac in. Expect to see incredibly colorful corals, loggerhead turtles, and possibly whale sharks, depending on the season.

Cozumel dive sites are renowned for their excellent visibility, drift dives and diverse marine life, including dolphins, turtles, nurse sharks, moray eels and colorful tropical fish. We will seek out Playa Mia, where you can snorkel in the Underwater Mayan City. Non-divers can tender ashore and visit the above-water Mayan ruins, a UNESCO World Heritage site. 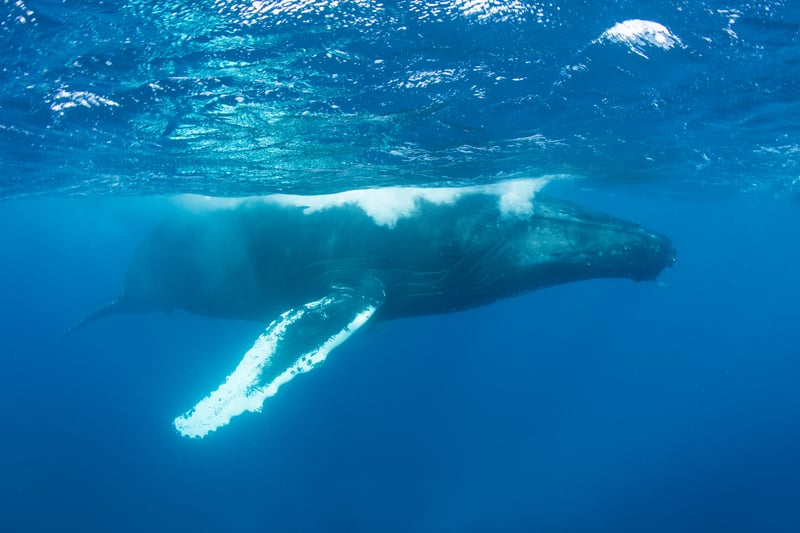 Silver Bank is a humpback breeding spot off the coast of the Dominican Republic and one of only three places in the world where you can safely swim with humpback whales. National Oceanic and Atmospheric Administration (NOAA) announced in 2015 that Silver Bank and its neighbor Navidad Bank has the most significant North Atlantic humpback whale population. 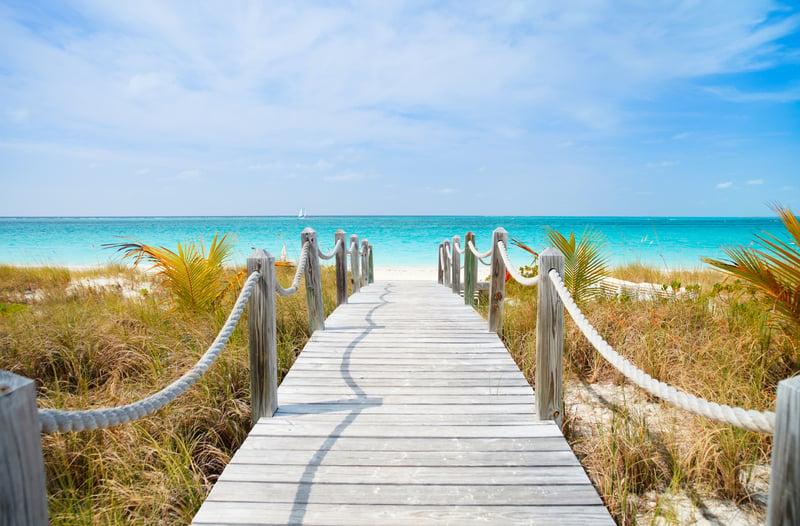 Not far from Silver Bank and the Dominican Republic are the twin island gems of Turks & Caicos. The British Overseas Territory archipelago consists of 40 low-lying coral islands in the Atlantic Ocean. Its luxury resorts, shopping, pristine white-sand beaches and clear aquamarine waters are well known. Also, a treat for scuba divers is a 14-mile barrier reef on the gateway island, Provo, and a massive 2,134m underwater wall off Grand Turk island.

MV Narrative will dock in the first-class facility of Grand Turk Cruise Center, which has direct beach access amid 14 acres of landscaped surrounds. It’s impressive, to say the least. You’ll also have a 45,000 sq. ft duty-free shopping center selling everything from luxe jewelry to hand-crafted local souvenirs, all within the cruise center. However, we suggest exploring some of the Caribbean’s best beaches, snorkeling and diving sites.

We’ve already explored the south Atlantic Ocean, including Brazil, the Falklands, South Georgia and the South Sandwich Islands. Further north, we discovered the rugged and impossibly scenic Saint Helena. There are also some fantastic gems further north, which we will explore as we cross the mid-Atlantic ridge. 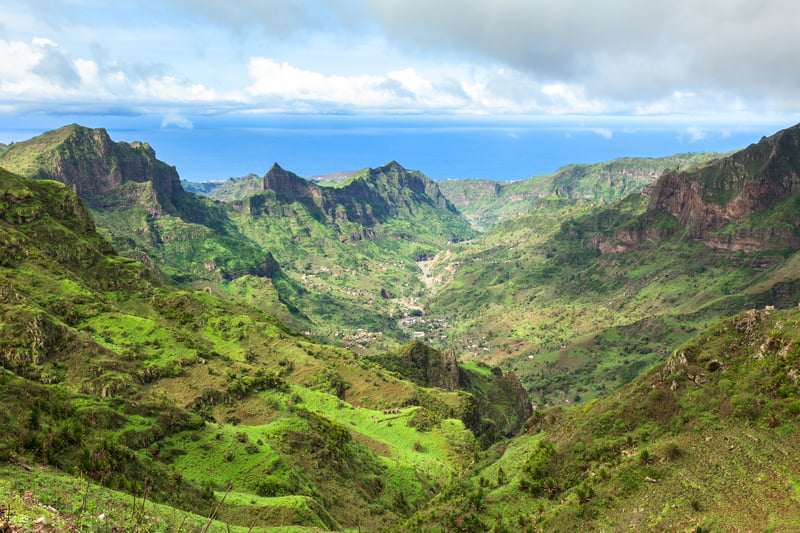 Crossing the South Atlantic Ocean, you’ll be happy to stretch your legs on a lesser-known island nation after a few sea days. Welcome to Cape Verde. Located off the west coast of Senegal in northern Africa, the Republic of Cape Verde is a former Portuguese colony. As such, Portuguese is the national language. It played a dark role in the Atlantic slave trade due to its convenient location. The archipelago consists of ten volcanic islands, making it a hiker’s paradise.

Mindelo’s deep water port is the main island used for cruise ships. It’s about a 15-minute walk into town or a $5 shuttle bus ride. Mindelo is the cultural capital and by far the most exciting city of the Cape Verde islands. It’s set amongst a picturesque bay with charming colonial buildings, cobbled streets and fantastic nightlife. But mainly, Cape Verde is all about the cultural sites and excellent hiking. 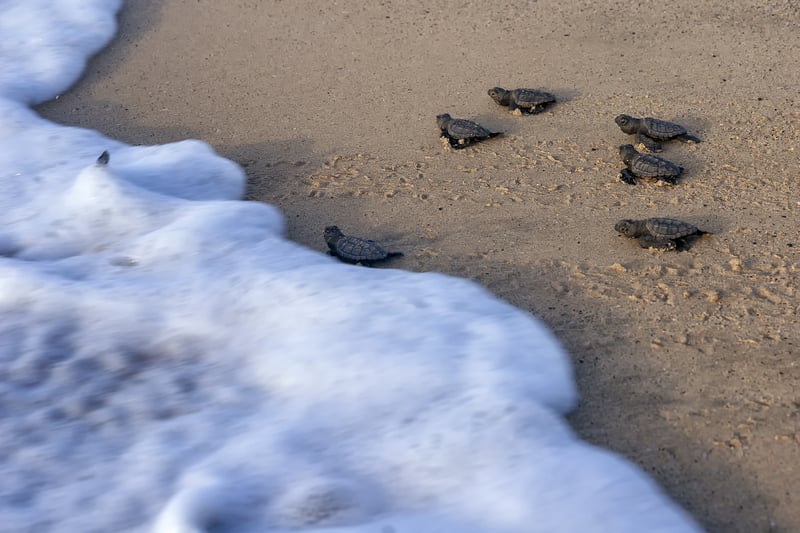 Project Biodiversity is a Cape Verdean non-profit organization that aims to save the loggerhead turtle from extinction. The loggerhead turtle nests on the island of Sal from June to October, one of the most critical nesting sites in the world. If you happen to be there during this time, you can do a guided night tour to witness the incredible natural phenomenon. If you donate and ‘adopt a hatchling’ you can also name one. 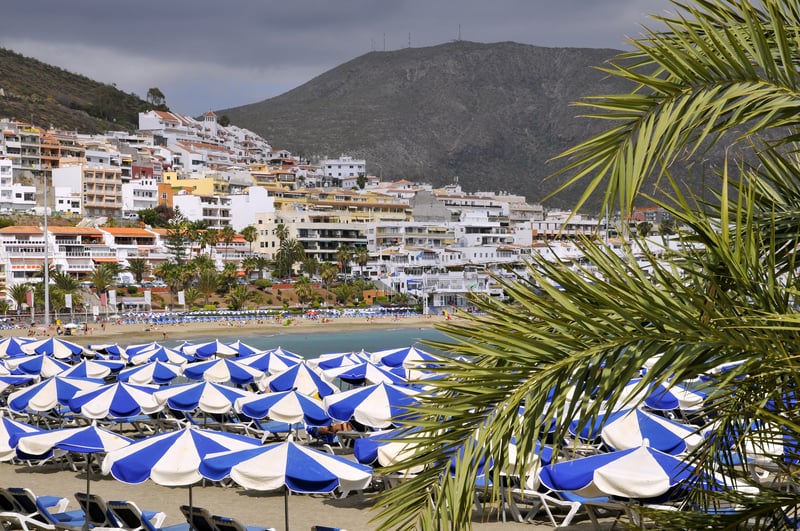 We’re heading north now up the coast of the western Sahara to the Canary Islands, a Spanish territory. They are an archipelago comprised of Tenerife, La Gomera La Palma, Gran Canaria and Ferro islands. The original inhabitants of the Canary Islands were the Guanches, but, like many places we visit, they were conquered by Europeans: in this case, the Spanish. The islands are known for their historical significance, national parks and diverse cultures. They have been a popular tourism destination for Europeans since the 1950s.

Santa Cruise de Tenerife is the leading cruise port and most likely where we will dock. It’s also relatively new, pleasant and modern. The Port Authority kindly provides free shuttle buses to take you to Plaza de Espana, the town center. However, it is a lovely walk into town. Tenerife is the largest of the Canaries and has a reputation as one of the most scenically breathtaking islands in the world. But every island has its own appeal and attractions, so we might as well explore the other islands as well. 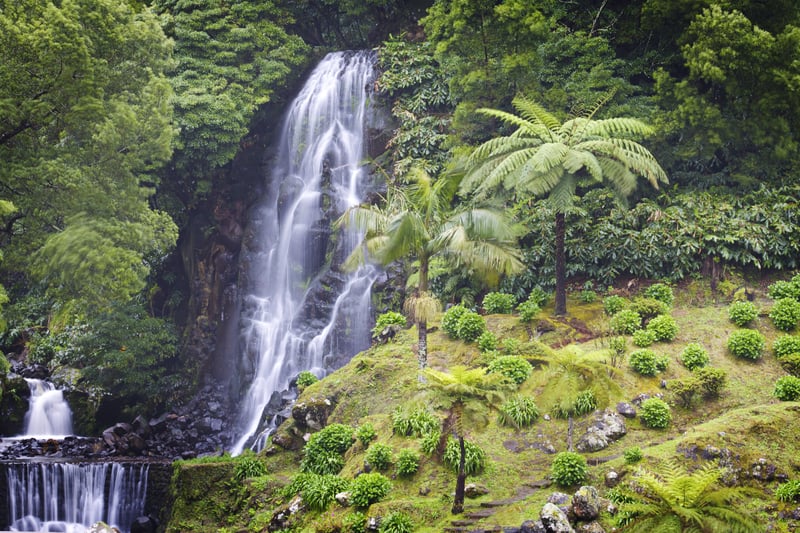 Crossing the Atlantic now to the autonomous region of Portugal, the Azores. Situated in the remote north Atlantic Ocean, west of Portugal, the Azores are an archipelago of nine spectacular volcanic islands created over a million years ago. Ships often cruise into Ponta Delgada port on Sao Miguel Island, the region’s capital city, but there is so much more to explore.

Let’s hope to arrive in spring or summer as the Azores can get harsh, rainy winters. Plus, we could experience Noites de Verao (Nights of Summer), a summer festival held in Campo do Sao Francisco square. Attracting locals and tourists alike, vendors sell refreshments, food, and miniature goods, and there are nightly musical events, including famous singers, and folklore bands featuring national and international stars. But the main attractions require day tours to discover the natural beauty of the island’s diverse landscape.

Thank you for joining us on our tour of the Caribbean Sea and the Atlantic Islands. Be sure to join us for the next leg as we venture up and explore the U.K. and Ireland.

Storylines is a luxury lifestyle ship with a like-minded community of globally-conscious citizens traveling the world. We seek unique experiences, cultural events and community participation while practicing and promoting sustainable travel. To learn more, visit our website.