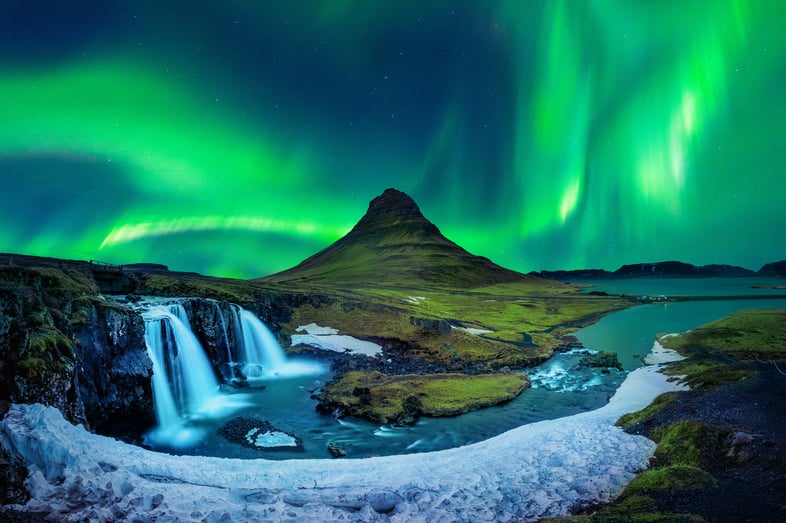 As Storylines MV Narrative is a residential vessel, our global community has a say in the itinerary…just one of the many benefits of having a home aboard a residential megayacht. As you can imagine, the destination travel wish list of our residents is extensive so we have broken it down and created a series of blog posts, having covered these regions so far: 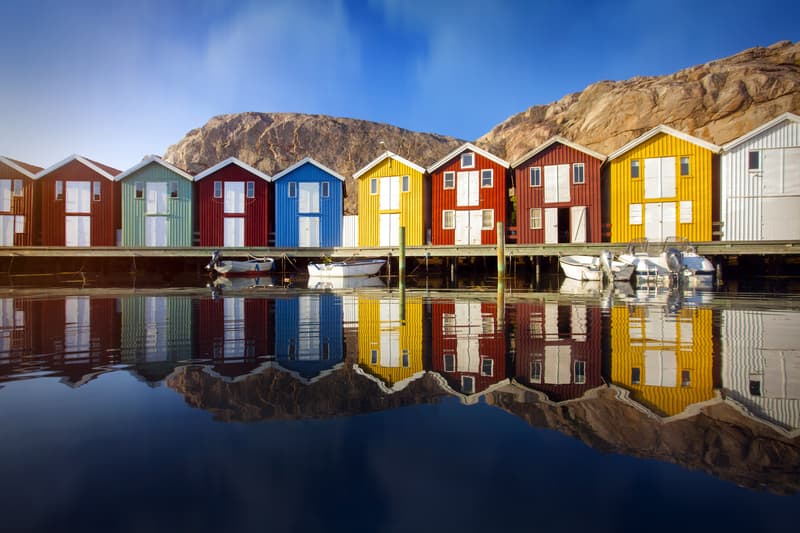 Here are the bucket list destinations in Scandinavia requested by our resident owners:

Every country except Finland made the Scandinavia list. Sorry, Finland! With abundant natural beauty, UNESCO World Heritage Sites, iconic cities and the northern lights, it's easy to see why traveling Scandinavia is on many adventurers' bucket lists. 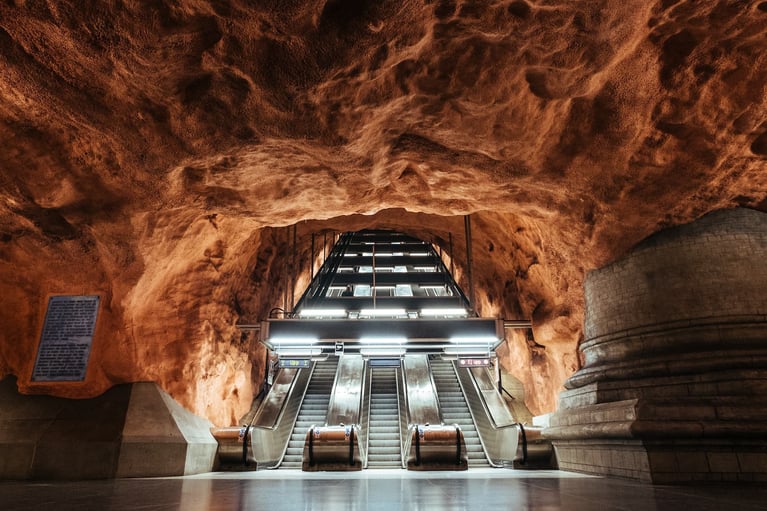 Ships dock in the Port of Stockholm, a uniquely beautiful and stylish city spread over 14 islands connected by 57 bridges. Island hopping on the ferry ride is a great way to explore the city. Another option is the City Sightseeing hop-on on, hop-off bus tour. This double-decker bus with an open-top roof offers a great vantage point for touring this charming old town.

Stockholm has several Michelin-starred restaurants for gourmet food lovers, including the 3-star Frantzén, and 2-star Oaxen Krog, Gastrologik, and Aloë. Besides the delicious cuisine, you will admire these fine dining restaurants' quintessentially Swedish sleek design. For something a little less fancy yet at the same time tasty, try out the street food at the Hornstulls Marknad (market square). 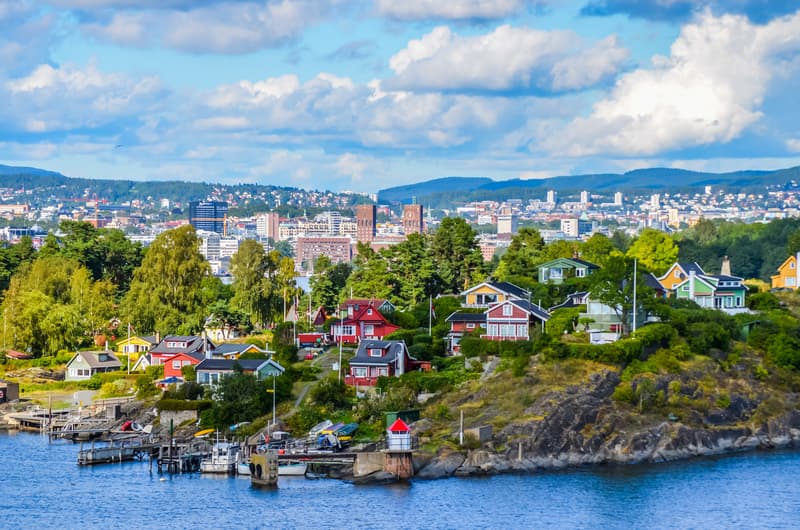 Cruising into Oslo is an incredible experience. It is tucked away up the beautiful Oslofjord, and the ship docks right in the middle of the city. You can easily explore this charming old city on foot and visit the City Hall, the Opera, and the Nobel Peace Centre. Oslo also offers an impressive 50 museums, an abundance of galleries, and the world's best Christmas Markets.

Like Stockholm, the ferry ride is a great way to get around, or the City Sightseeing hop on hop off bus tours. The good news for the Storylines community is we spend up to five days in each port. Unlike a regular cruise, this allows you to get farther inland from the port cities and immerse yourself in Norwegian culture. 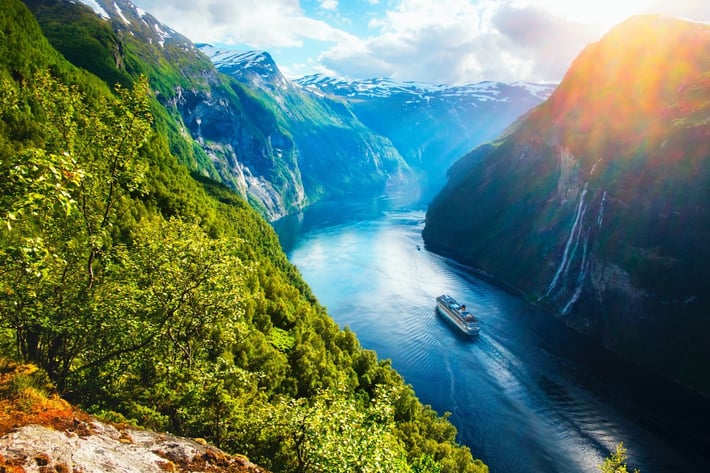 The Fjords are long, narrow and breathtaking bodies of water that reach far into the Norwegian Lapland through deep valleys flanked by mountains. Norway has over 1700 fjords, and thankfully many of these natural wonders can be accessed by large ships. If the Norwegian fjords are on the itinerary, then the city of Bergen most likely will be too. Storylines residents can also embark on a port-to-port train ride on the famous Oslo to Norway Bergen Railway before linking back up with the ship. The train travel scenery is spectacular, especially during winter. It’s like the polar express!

Lofoten Islands and the Northern Lights 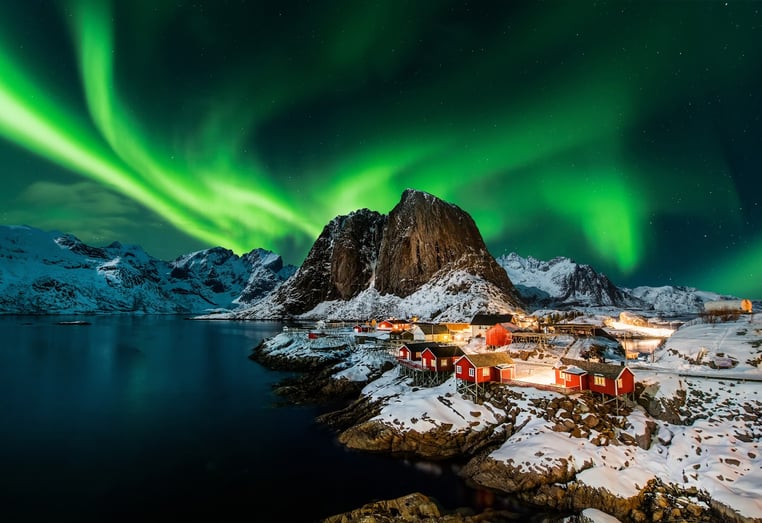 The Lofoten Islands are off the northern Norwegian coast. They consist of charming Santa Claus-like villages from the North Pole in wintertime. It's important to note that while the Loften Islands were explicitly requested, they are within the Arctic Circle and as MV Narrative is not ice-class rated, we cannot guarantee that the ship will journey here.

If possible, during summertime, MV Narrative  could dock at Stamsund on Vestvagoy or at Svolvaer on Austvagoya. If you cannot pronounce those names, you are not alone! These villages are famous as vantage points to see the northern lights during the winter months. 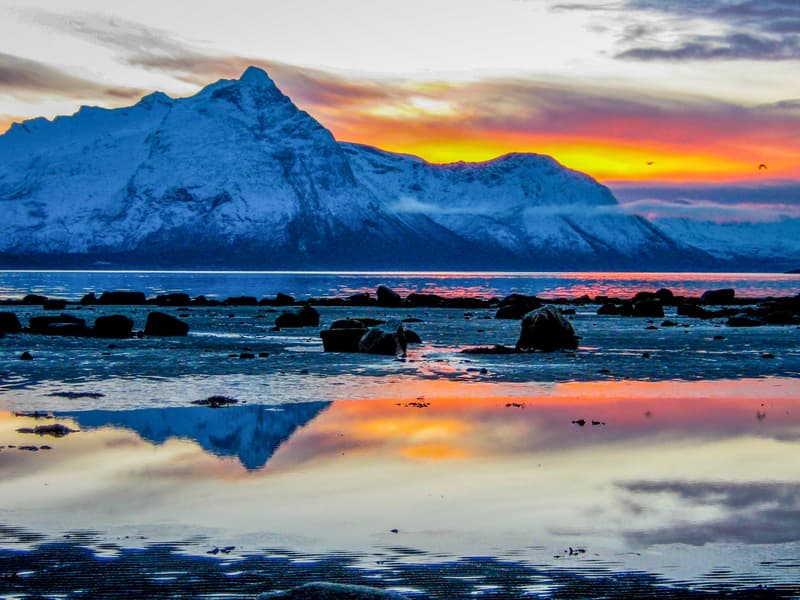 The Arctic Circle is the area that spans the top of the Earth and is bordered by Norway, Russia, the United States, Canada and Greenland. Unsurprisingly, it is on many world travelers’ bucket lists. Known as one of the last places on Earth still relatively untouched, it boasts other-worldly landscapes, national parks, bountiful wildlife, ice fishing, the midnight sun and natural phenomena such as the northern lights (aurora borealis).

Although it was requested, MV Narrative might not make it past the Finnish Lapland or Swedish Lapland as the ship is not built for the Arctic environment.

As Scandinavia is one of the wealthiest regions on Earth, environmental conservation is the best way to give back. One local and reputable organization is Wild Scandinavia, which runs various programs. One such program is its Beaver and Otter Research Project, where you get to explore the vast and beautiful forests of Scandinavia while carrying out critical research toward beaver and otter conservation. 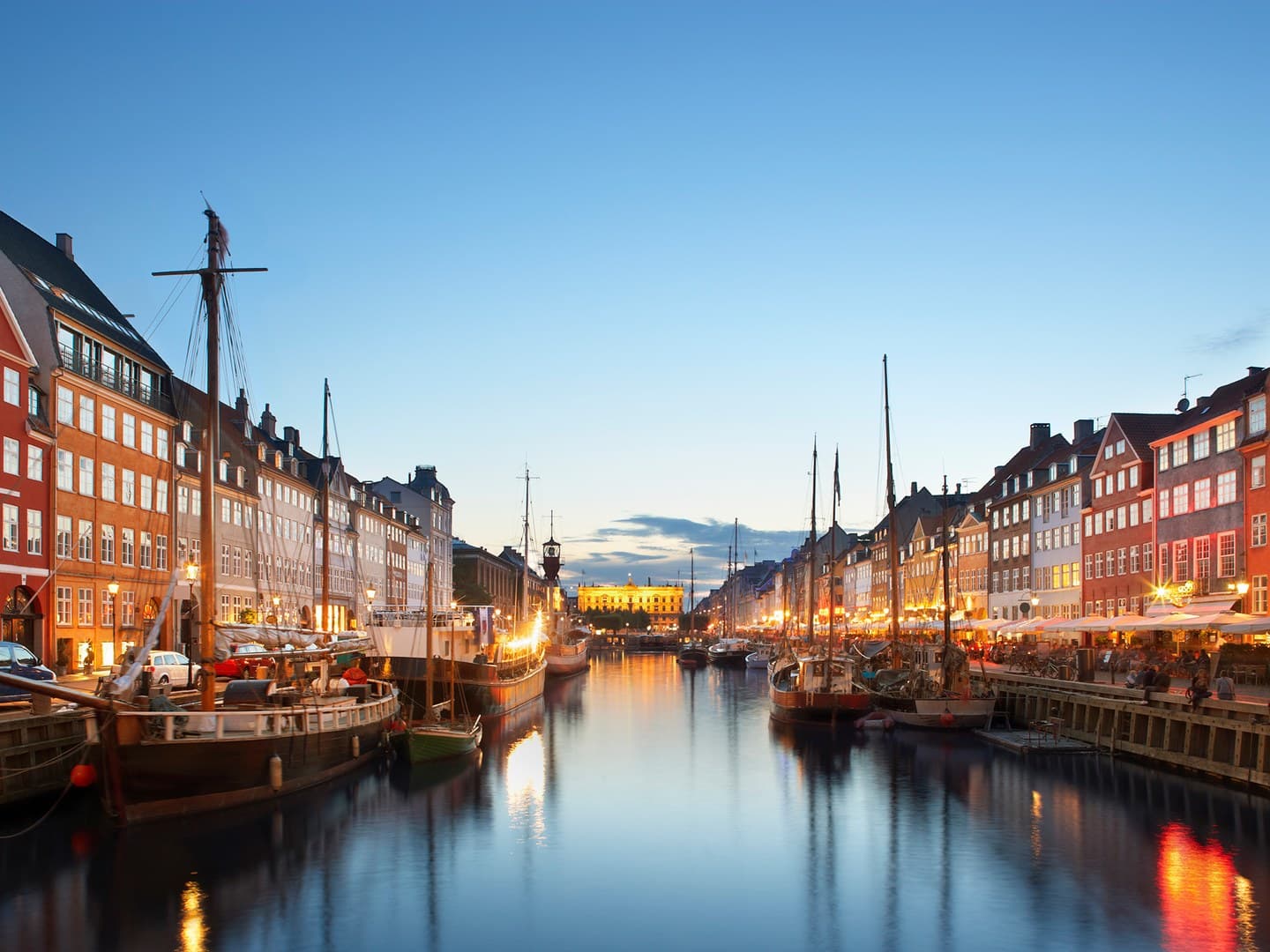 Ships such as MV Narrative dock at the Freeport Cruise Terminal in Copenhagen, Denmark. Copenhagen consistently rates as the happiest city globally.  But what exactly about it makes them so happy? It cannot just be the world-famous Danish pastry, or the beautiful canals, social equality, community spirit and beer breweries. It could be all of those things. But we reckon we know the real secret to their happiness:

Say what? Hygge roughly translates to coziness. And the Danes have coziness down to a fine art. They achieve hygge by creating a warm, cozy atmosphere while enjoying the good things in life with great people. Think of snuggling up with a loved one in front of the fire with a fine glass of red wine - that's hygge. The entire country loves hygge, and even the Danish royal family in their royal palace gets into it! 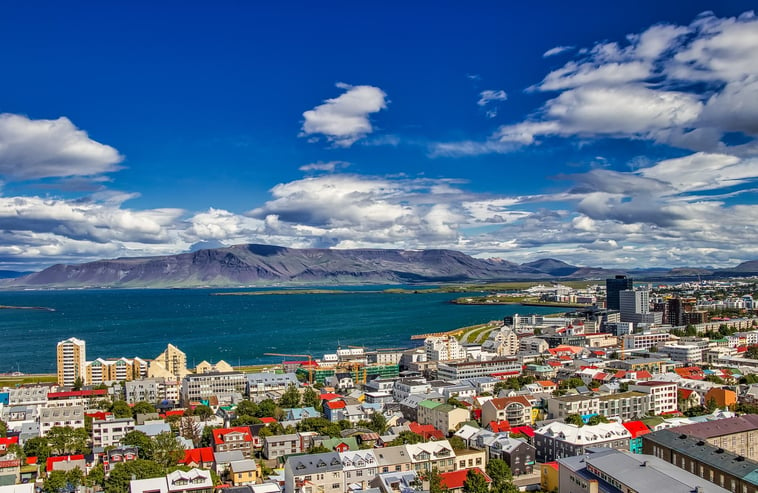 Iceland's tourism is booming and the government recently invested over $12 million in tourism infrastructure. This bodes well for Storylines when our MV Narrative cruises into the main ports of Reykjavik, roughly 2 miles from the city center. Shuttles are on standby to take you into town, or you can self drive a rental car.

Reykjavik is by no means a large city, meaning you can easily explore on foot. There are plenty of choices for galleries, museums, cafes and restaurants. However, we highly recommend tours visiting the city's seven thermal baths and pools in the great outdoors. There is simply no better way to relax.

Once again, the City Sightseeing hop on hop off busses are a great way to take in all this city offers. They come every half hour and take you everywhere you need to go, including the thermal baths.

For our scuba diving enthusiasts, a bucket list item is the UNESCO World Heritage site of Thingvellir. This is the only place where you can dive between two continents. A crack between two tectonic plates has created crystal-clear glacial meltwater. As a result, it is fast becoming one of the most popular dive spots in the world. 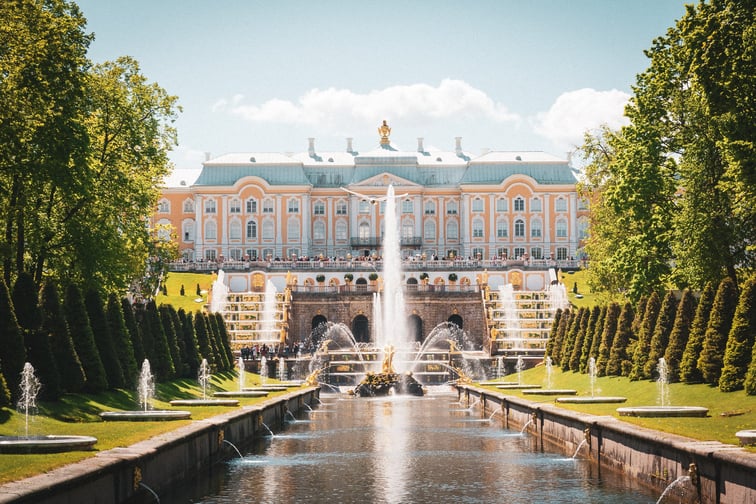 St. Petersburg is not technically a part of Scandinavia. Still, it's close, right next to Finland, which we bypassed...Sorry Finland! The Port of St. Petersburg is massive and can accommodate up to 7 cruise liners at once.

Known for its rich history, culture and architectural landmarks, St. Petersburg is known as Russia's cultural capital. This seductive old town is brimming with historic sculptures, baroque palaces, immaculate gardens, and centuries-old cathedrals with distinctive onion dome-style architecture. Conveniently, the Port of St. Petersburg is located in the heart of the city center. You can easily explore all the top attractions of the old town on foot or by guided tour. Be sure to try the local cuisine; it is superb.

There you have it, Scandinavian itinerary - done!  What an incredible region this will be to explore. Be sure to join us on our next leg of the journey…western Europe and the Mediterranean Sea!

Storylines is a luxury lifestyle ship with a like-minded community of globally-conscious citizens traveling the world. We seek unique experiences, cultural events, and community participation while practicing and promoting sustainable travel. To learn more, visit our website.